Sunday is made of “foodie dreams” as I bring you a new post from my series of “Visit Helsinki” posts in which I’ve been recommending you a special, must visit places in the city, from restaurants and hotels to spas and shops. I’m very happy to present you Bryggeri Helsinki- that has just been voted the beer restaurant of the year! Their house beer Weizen was chosen the best beer at Helsinki beer festival and their brewing master comes from Germany… Only these facts were enough to “lure” me into deciding to visit this gem on Helsinki’s food scene.

As you could have already concluded, Bryggeri Helsinki is a beer brewery/ restaurant. Even though food is as important and a lot of love and effort is put into each dish, they’re not complete without the main “thing” in Bryggeri  Helsinki and that is beer. Besides home favourites and produced on spot beers, this restaurant has the biggest and best beer selection from local Finnish small breweries. 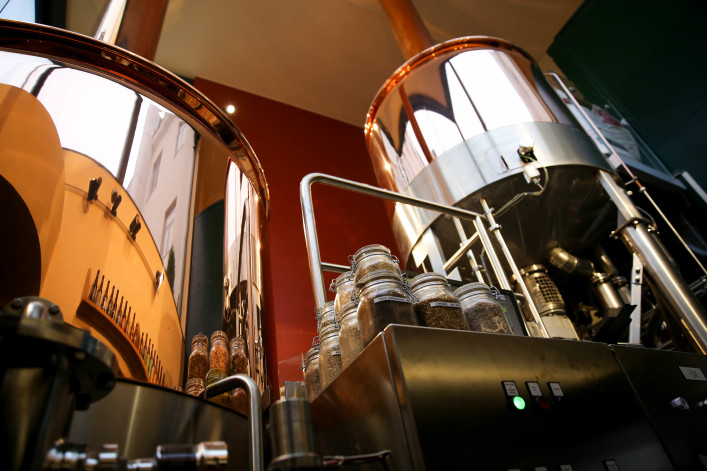 Speaking with the head chef and a master in pairing beers with the dishes from the menu, I got to know that they’re very dedicated to their work and lots of attention is put into matching dishes with the beers, so each dish which we were presented was accompanied by the fitting beer.

I have never seen this kind of concept before, because usually when you go out to the restaurants they might offer you a menu and a matching wines to go with it, but to match beer that wonderfully works with the food was something completely new and exciting.

Interior of the restaurant is kept minimalistic and the main star of the space are big brewing tanks which are impressive. Last time I saw something similar was in Prague, so to find something like that in Helsinki felt as if I was on a mini adventure learning about a whole new scene that I didn’t know existed in my town. 🙂 Bryggeri Helsinki is also very environment aware as they have started a co-operation with gas company Gasum, meaning that during the production/ brewing of their beer they’ll use biogas, renewable energy and resulting waste will be put into use/ production again.

For the starters we were presented with baked pumpkin, Finnish goat’s milk cheese and pomegranate salad along with the selection of starters of salmon gravlax ( Pils beer ), marinated mussels ( Weizen beer ), pork terrine ( Roggenfest beer ) and lightly salted beef ( India pale ale – english style beer ). Both starters came with the matching beers. It was very impressive that each bite from the selection of starters was presented with it’s matching beer. Beers def. brought up every bite to life and gave a complete taste satisfaction. Salad worked perfectly with Citra – extra pale ale, very American style beer, one of customer favourites too. We were excited about the main course as we were tasting two completely different dishes. I had a vegetarian option of lentil koftas, smoked yoghurt, orzo pasta, spinach and roasted cashew which was very Indian inspired dish and one of the best ( and most satisfying ) vegetarian dishes I’ve found in Helsinki. The dish was paired with sweeter and soft, Summer popular beer, fruity Rose. Even though we were quite full, we couldn’t pass on a dessert so we went for a lemon pie and raspberry sorbet which were outstanding! So worth “unbuttoning” our pants and making space for this sweet tooth bomb as it was the most delicious lemon pie ever! I felt the taste of Summer in my mouth. 🙂 I hope that I have convinced you to visit this amazing restaurant if you’re living in Helsinki or will be visiting my city in the near future. If you want to spend a buck or two more and having a unique experience, then Bryggeri Helsinki is so worth it!

*This post has been made in collaboration with restaurant and brewery Bryggery Helsinki, all of the opinions are my own.

*Thank you Ali Suviala for making this collaboration possible!