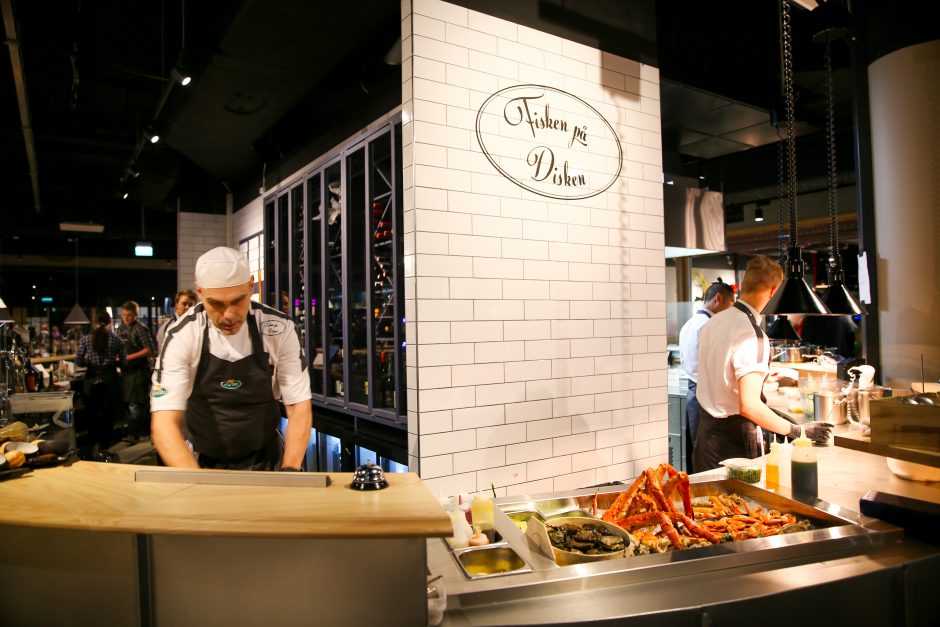 In the beginning of this month a long awaited 5th floor in Kamppi shopping mall got a huge facelift or shall I say a complete makeover?! Everybody was waiting for many months to see the final reveal of “Kortteli”. After years of having a dull, not well used space with a ton of potential it finally got completely redesigned and the space got filled with a so called food block.

All of the 9 restaurants, hairdresser and a spa were all welcomed with standing ovations. Helsinki gastronomic scene just keeps on growing and people seem to be more eager than ever to visit newly opened restaurants and dine out more often. Add a breathtaking view over the city centre and you’re def. gonna want to come back to Kortteli numerous times. 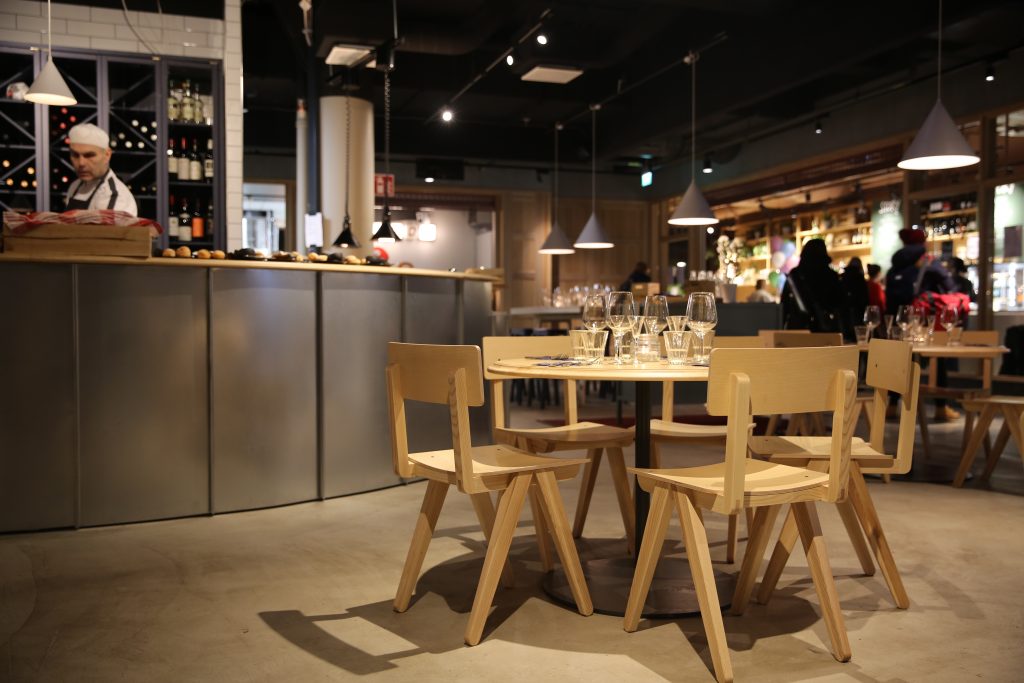 Ever since the opening, I must admit that Kortelli was on my radar quite a lot and so far, I’ve been pretty much to all of the restaurants in there and some of them have returned to couple of times.

I have been to Fisken på disken twice prior to going there again for this review. I must admit that we didn’t “start off” on the right foot, but third time is the charm… Was it really? Read on the review to find out. 🙂 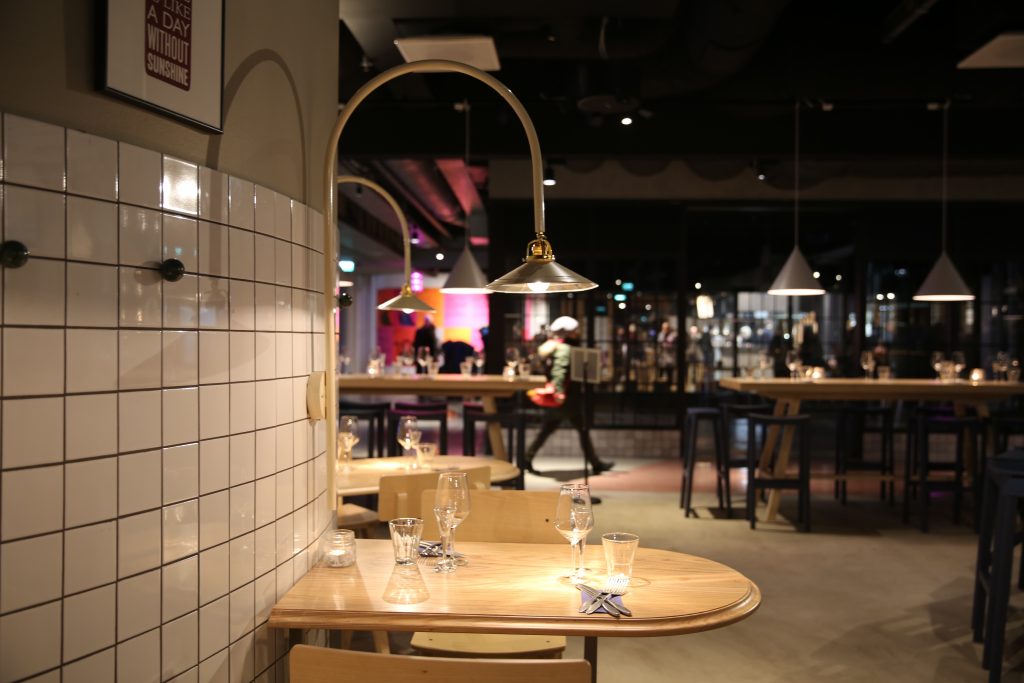 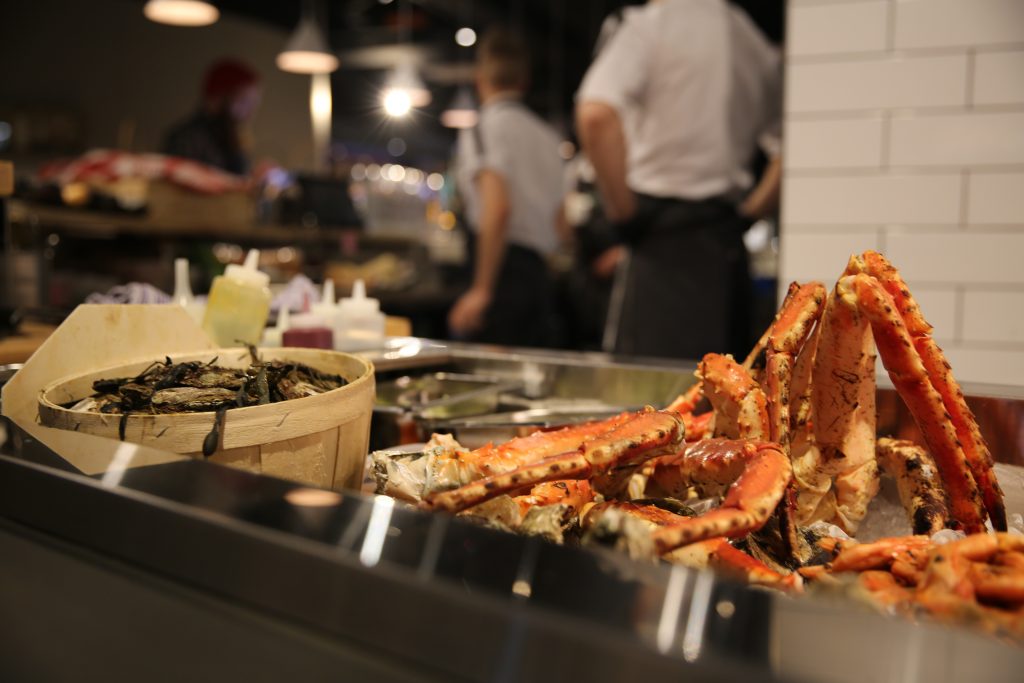 Fisken på disken would translate to “Fish on the desk”. Very promising and rarely found fish restaurant in the heart of Helsinki pulled my fish lover’s heart strings into visiting it but as mentioned above, it didn’t deliver what I’ve expected from it. I guess that I went too enthusiastically after their “Fresh seafood bar” and wanted all of the seafood/ produce to be some of the best ones I’ve had chance to eat in Croatia, London and LA for instance. Blue Plate Oysterette was an outstanding experience, just like did multiple, “no name” places on Croatian coast or Polpo in London.

I have decided to return this third time and test their set tasting menu with one extra addition as greetings from the kitchen. 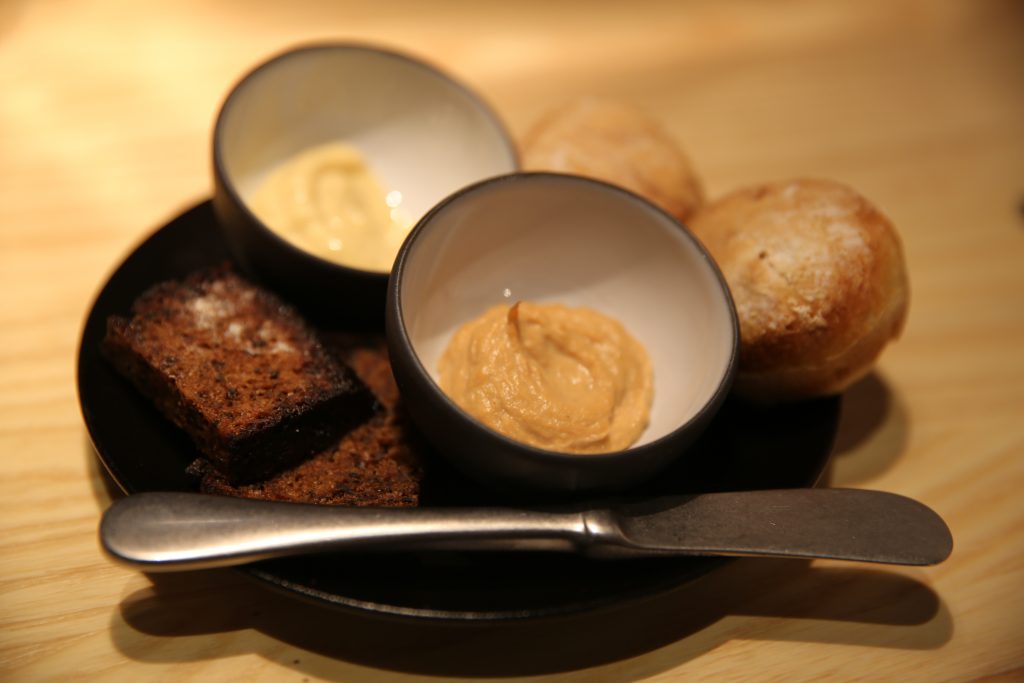 First of the dinner started with some homemade sourdough and white bread and two different spreads: tuna and butter. I must say that the sourdough bread and tuna spread were SO delicious that I have wished to have them this morning for my breakfast. 😀 I don’t really eat bread, but when I do, then it must be a homemade one and usually I always grab the sourdough or rye one. 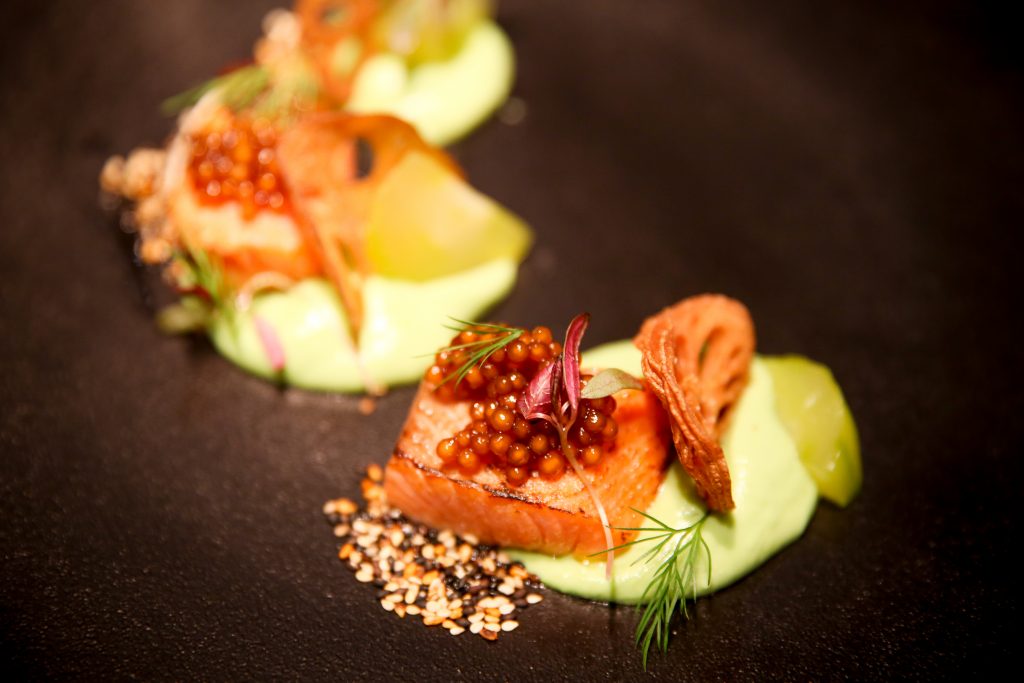 First starter was seared salmon on avocado puree with tapioca seeds, dried lotus root and pickled cucumber. I have truly enjoyed this dish, it was a light, refreshing starter and absolutely wonderful combination of tastes, crunch and it left me wanting to have more of it. Tapioca seeds are unusual “agent” in dishes prepped around Helsinki so it was something refreshing to taste and see how it works in combination with salmon. 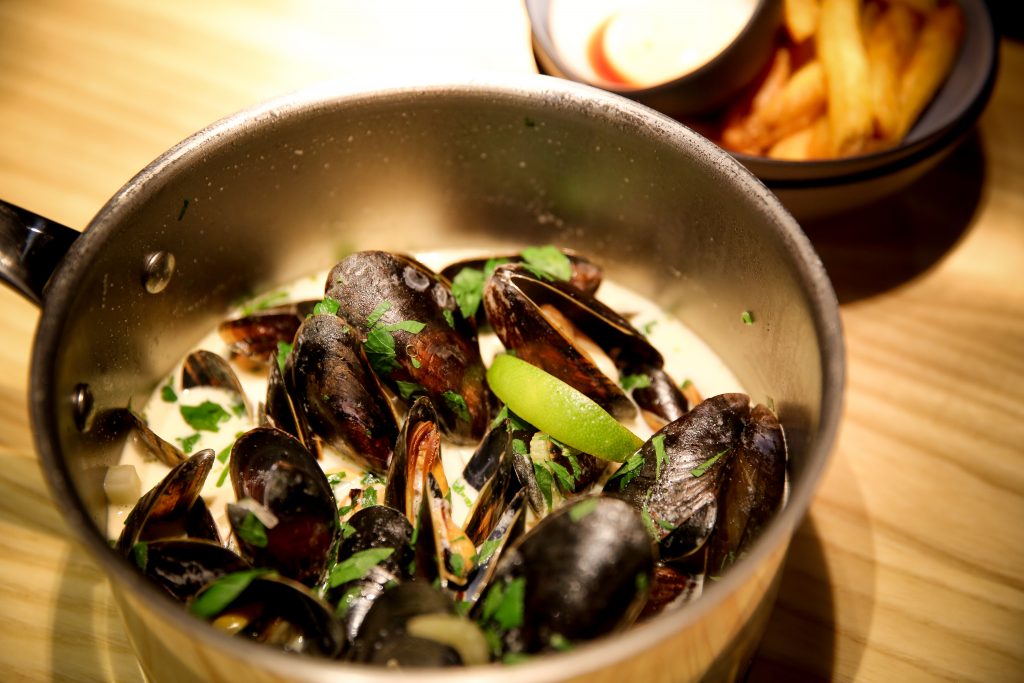 Next up were mussles… Yeah… That’s a very tricky dish to impress me with because: A) I totally do make the best mussles there are 😀 and B) I do come from the country where I have fished those mussles as child and cooked them for numerous family lunches with my dad and uncle so the dish really needs to be prepared so well to meet the expectations.

Mussles were cooked in white wine and cream sauce with lemongrass, herbs and a squeeze of lime. They arrived with a side of french fries and miso mayo. It wasn’t a bad dish by any means, but the sauce was too bland for my taste and pretty basic one. It’s good for Finnish standards but sorry to say, it’s not meeting the “world traveler” ones… 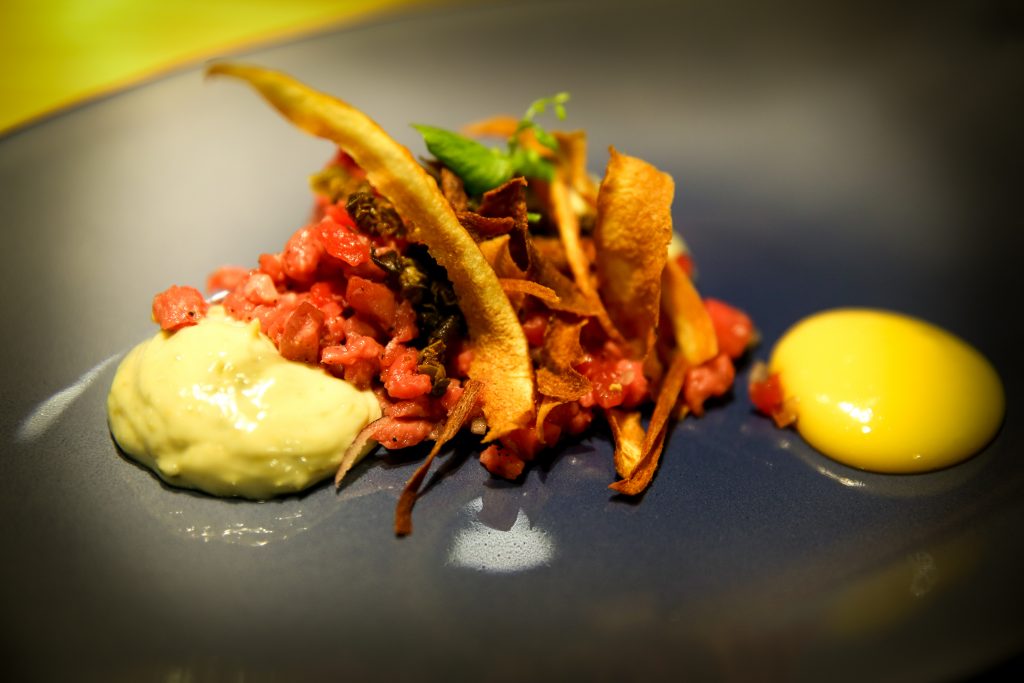 Next up was the beef tartar. You read it right – beef, not fish. 😀 I guess that in every restaurant you must have at least one meat option in starters and one in mains in order to have at least that for somebody who just loves their meat too much. 🙂

I would recommend the chefs that when serving a tasting menu of the fish restaurant to go with their whitefish ceviche which I haven’t tried but they have on the A – la -carte menu as that would fit way better into the “tasting” than the beef tar-tar. The beef meat is freshly cut every day before the service and it’s a local, Finnish beef so 100 points for that to the restaurant! 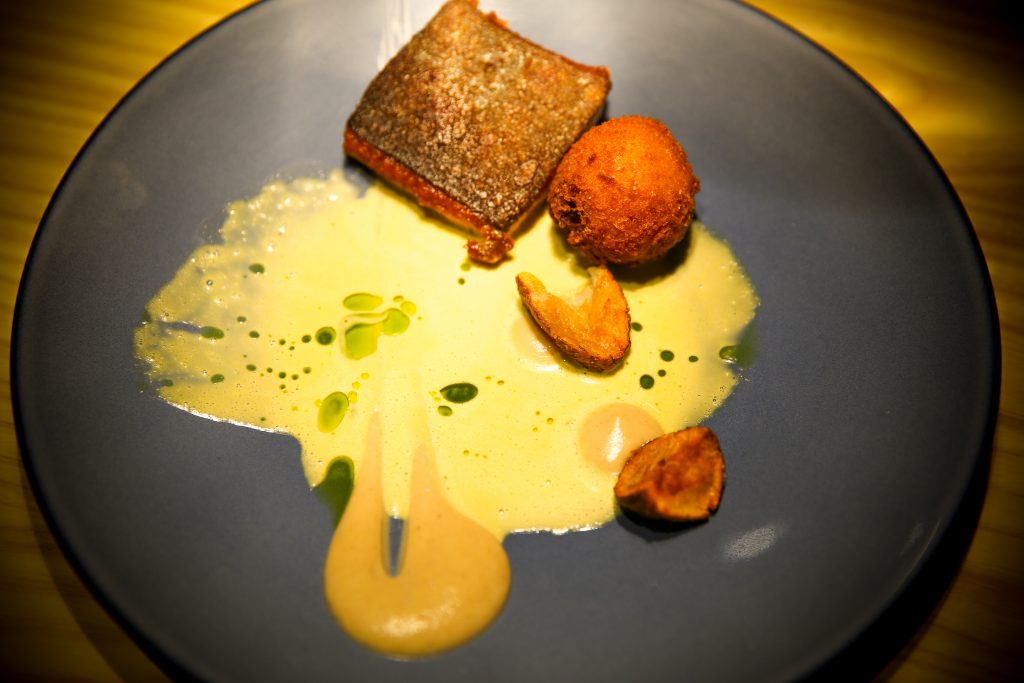 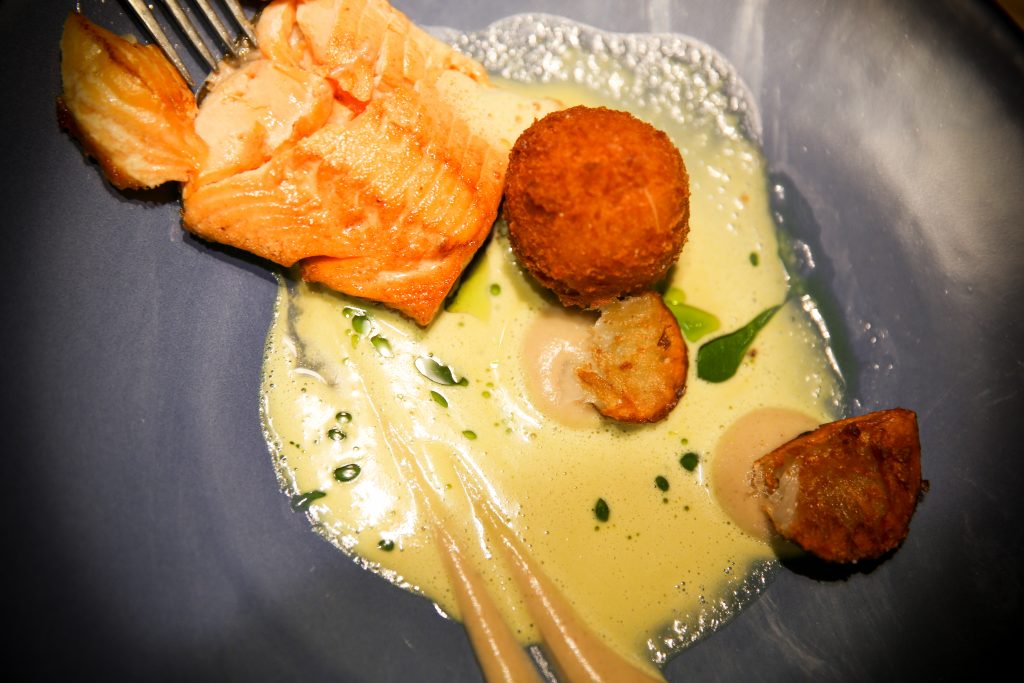 Main course was something I knew was going to be the highlight of the dinner since it had one of my top 3 favourite fishes – Artic char. Grilled artic char with pike croquette in garlic and parsley sauce with artichoke pure and fried artichokes. I’m not the biggest lover of fish skin, so I always, in any restaurant take it off and then I eat the fish. So after this small adjustment, I have just blended everything together and the dish was wonderful. Artichoke pure gave such a deep and rich taste to the fish that I was loving the taste of those two combined, but when added the lightness of garlic and herb sauce with crunchiness and citrusy taste of pike croquette ( which btw totally tricked me because at first I had the impression that it was a potato one ) it was a dish which def. made up for all of the “mishaps”. Well done! 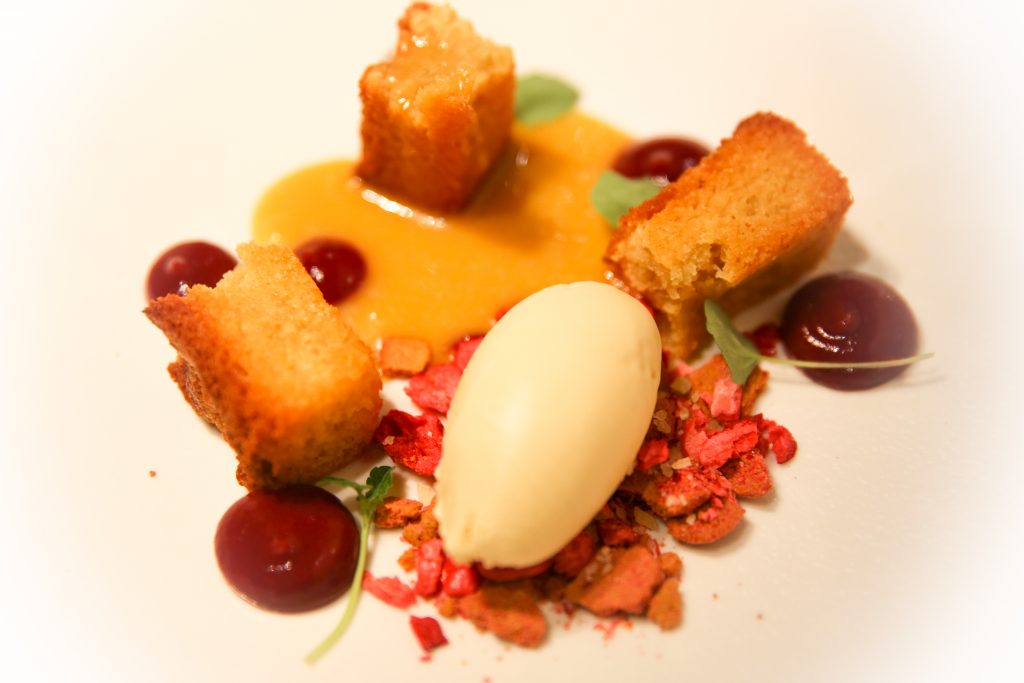 Final, but not least important dish was the dessert; almond cake with salty caramel ice cream, cranberry sauce and dried cranberry flakes with cinnamon sauce. I have tried this dessert before and yes, I liked it a lot. If I admit my sweet tooth problem then I’d say that it was my favourite course of the whole dinner, but since it’s sweets and I was testing the fish restaurant… I’d give them 3 out of 5 stars and say that thumbs are def. !UP! but with a lot of room left for improvement and creativity.

Fisken på disken is on the right path and is slowly charting it’s way up on the gastro scene but a fine tuning is mandatory in order to stand next to the “big players” of the same scene.

*All of the opinions are my own.

*Thank you Fisken på disken for this experience and my “beard guy” buddy aka the coolest server in town. 😀

Dreams of sushi with Foodora